A planned conversation did not start on time. Many youths we invited did not show up and eventually the 8 that came were not familiar faces at our activities.  With the small number, the adults in the room outnumbered them and we were concerned that the youths would feel over-powered. Thankfully, the ice-breakers got people mingling and reduced initial perceptions people may have had of each other that would have been a barrier for active participation.  So, when asked to act out what life would look like in 5 years’ time, 3 visitors from Germany, 3 volunteers from the Prime Minister’s Office and 8 youth, half of whom do not have secondary education, participated actively and presented a range of aspirations that broaden the picture they each had of life.

A visitor from Germany saw herself employed as a social worker and having a home of her own. A volunteer from the Prime Minister’s Office who is a trained teacher pictured herself back in school teaching and guiding her students.  Another adult wanted a attain a Masters Degree and to live closer to her parents. As for the youths, one aspired to be a fashion designer and another, a beautician. An older youth pictured himself in front of a television with popcorn and a drink and a teenage girl who was the youngest present, saw herself as a homemaker caring well for her many children.  This teenager envisioned her children doing well in school and a husband who could provide enough for the family to holiday overseas. 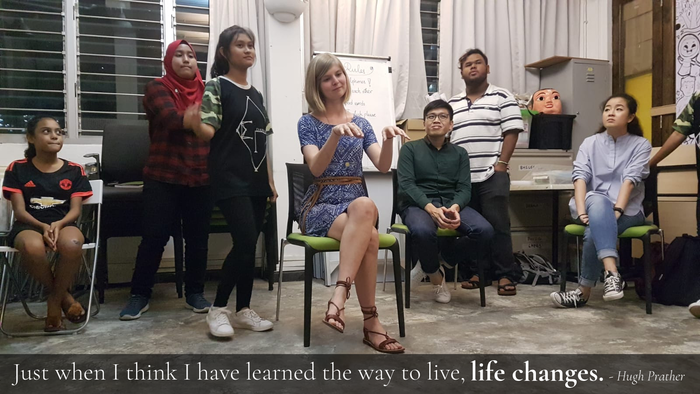 In all honesty, our initial response was concern about some of the aspirations the youth shared – watching Netflix or caring for children are not dreams that most Singaporean teenagers might typically put forward, and it gave us pause. In processing it further with each other, we wondered if our discomfort said more about our narrow ideas of ambition and well-being, than the youth’s lack of imagination. Caring for children, for example, is an extremely valuable form of labour and contribution to society, albeit not often recognised as such. We also questioned if the youth had a much stronger grasp on their realities and the future open to them, than we would allow ourselves to believe.

At that point, we were grateful that the youths were also able to listen to aspirations that were far different from their own.  However, we must check out what effect this had on them and hopefully it was not an experience that would discourage them from engaging in further conversation. In a couple of weeks’ times, we will be having a series of conversations around the theme of “family competence” where issues such reproductive health, parenting, financial planning, family identity and such will be surfaced. We will be inviting these youths again and hope they will join us.

Peace is the beauty of life. It is sunshine. It is the smile of a child, the love of a mother, the joy of a father, the togetherness of a family. – Menachem Begin