Perhaps it was the name of the event as 15 boys showed up when we would have been happy with 8 to 10. “Bros and Burgers,” was a boys’ night we held this week for an honest and open conversation about relationships, sex, pornography, gender roles, peer pressure and teenage pregnancy. Two weeks ago, there was a girls’ night in similar vein and such work is not just about healthy youth development but is part of a holistic attempt at supporting communities to reflect on family planning and the role of the family in guiding its young and caring for all its members.

The game “Blow Wind Blow!” was introduced to surface beliefs and values among the group. Seated in a circle, participants had to stand up and change seats if they agreed with the game master’s instructions. “Blow wind blow. Blow all who believe that boys and girls are equal,” only had half the group moving.  When “Blow all who agree that when dating, a man must always pay,” almost everyone moved.  “So, these boys have been socialised to behave chivalrously toward women?” we thought but when half did not believe that they needed to ask their partner permission for sex, we realised that chivalry did not die, it just wasn’t in the room.

Credit to the boys though for their blatant honesty. We learnt that only two among them would use a condom, and this led another seeking advice for a friend who had gotten his girlfriend pregnant.  The boys did not shy away from the agenda and were earnest in engaging with it. They were thoughtful when we asked them, “What makes a man?” On the whiteboard, they made a list of qualities; each of which, a useful talking point to take the conversation forward meaningfully. 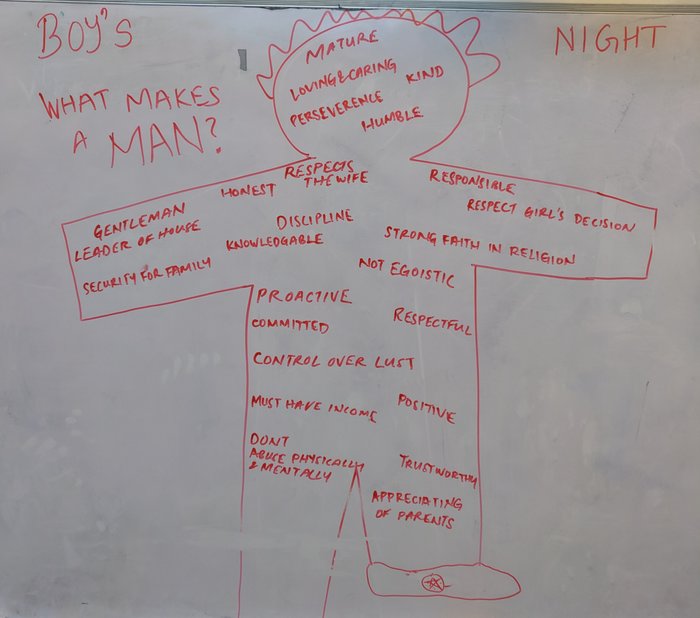 Much ground was covered and while we would have preferred more in-depth discussions, it was also important to get a feel of the different issues that were on their minds.  Lust, pornography, the pressure to act like a man and the role of the woman in the household were issues on their mind.  They wondered what being married would be like.  Would they want their wives to work or should they even allow her to do so?  If girls and boys are not equal, how are decisions in a family going to be made?

Our role was to help questions surface and ensuring that when answers cannot be questioned, we must know why. Many   beliefs, attitudes and values that can potentially harm others are never questioned, and we often justify this by claiming that it is not culturally appropriate or offensive to do so.  I suspect we do not question because we don’t know how or are uncomfortable doing so.   People usually find it helpful and comforting being able to discuss issues that affect their well-being and the boys present knew exactly how such conversations should be conducted.

Before the session ended, they reflected that it was a meaningful discussion because everyone’s point of view was listened to and no one felt that they would be criticised after doing so.  They reckoned that it happened because of the mutual respect and humility everyone brought to the room.  They   saw value in such a conversation and were also optimistic that   it could continue in their neighbourhoods. One declared, “If we can do this at the Beyond office, we should be able to keep talking in the community too.”   Well, we certainly hope he is right.

If we are going to talk, then let’s talk. Forget about what is polite or proper and delve right into what is sincere and honest. – Beau Taplin