Last Saturday, the Kampong Henderson Day concluded with Member of Parliament, Joan Pereira recognising students in the neighbourhood who had done well followed by a breaking of fast meal where I had the privilege of sitting next to a top executive from a multi-business company.  I am not mentioning his name as I have not told him that I am writing about our encounter.

As a child, he resided at the Henderson neighbourhood and he recalled how easy it would be then for a young person to get onto the wrong side of the law.  He had his fair share of skirmishes but guidance from the officers at the Police Boys’ Club, basketball and the friendship from shopkeepers and many others kept him out of harm’s way.  I would think that it was also a sense of gratitude and the loyalty to one’s friends that his family impressed on him.

After a basketball game, he noticed his friends refreshing themselves by sucking on ice-pops. He was deeply disturbed when he learnt that they had stolen it from the sundry store who supplies his family food and other household items on credit.   Understandably, he felt a little powerless stopping his friends but that did not stop him from putting things right in his own way.  Every time he noticed his friends having ice-pops, he would record the number and when reimbursing the sundry store for his family’s weekly supplies, he would pay for the number he had recorded.  As ice-pops cost 10 cents, it was usually about a dollar more.  Once or twice, the confused storekeeper asked him about the extra payment, and he said that it was for something extra his mother had taken without recording.  Eventually, the storekeeper stopped asking.

I am not sure how good a student he was, but this was a young person from the Henderson neighbourhood who had done well and continues to do well today.  His sharing was also apt for Ramadan and in the spirit of “rahmah” the Islamic blessing of mercy, grace and compassion. 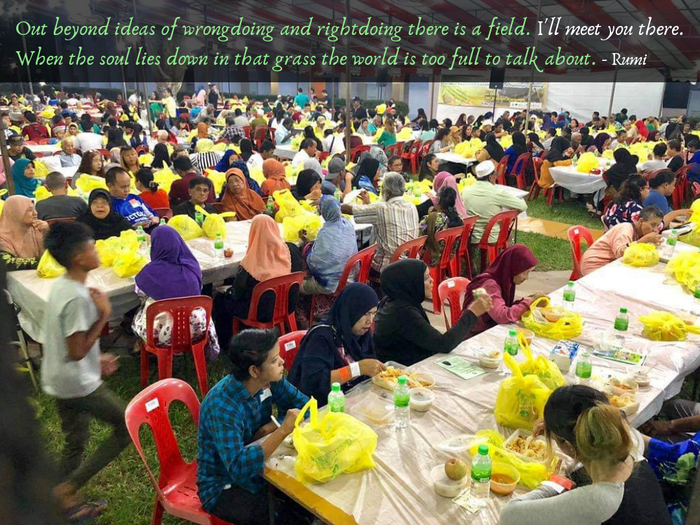 A few days before last Saturday’s dinner, 4 of our youth organised a breaking of fast meal for 20 children at the Jamiyah Children’s Home – Darul Ma’wa.   They had been planning this for about 6 weeks and raised $449.40 among friends to pay for the meal. Money is not a resource that these youth and their friends had in abundance but when they considered the plight of the children in institutions, they reckoned that they were relatively blessed and in a good enough position to bless others.

At the end of the evening, as they youth were leaving, several children came up to bid goodbye.   It was the beginning of a newfound friendship that these youth will continue to nurture by volunteering at the home soon.

Ramandan ends on the evening of Tuesday, 4 June. May we take this opportunity to wish all Muslims   Selamat Hari Raya Adil Fitri in advance and may rahmah always be present in your thoughts, deeds and encounters.

“Try to have as many as possible true friends, for they are the supplies in joy and the shelters in misfortunes.” – Bihar Al-Anwar