We continued our conversation with a group of boys about healthy relationships, sex and family planning (AWB – 1911). This time we offered biryani instead of burgers and 6 “older” youth showed up.  After dinner and a game of charades that got everyone laughing heartily, the youth were paired up; some with an adult volunteer.  Each pair was given a short script entitled “Tonight’s the night” which was a short exchange between 2 boys, one of whom had plans for sex later that evening. 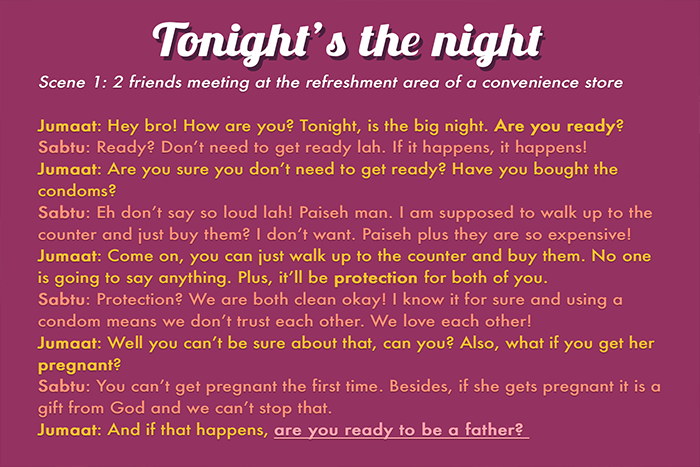 Role-playing with a script was an effective way of immersing oneself into a context and addressing issues that are difficult to articulate. The 5-minute exercise surfaced the issues of sexually transmitted diseases, contraception, trust, responsibility, beliefs, long term planning and stigma.  These were heavy subjects put forth in a light-hearted way but importantly, the conversations that followed were not frivolous and lasted for about 2 hours.

The youth admitted that they felt embarrassed buying condoms and at $5 for a pack of 3, it was not quite affordable.  A box of 12 at $10.90 would be cheaper but it was difficult to share it with friends as no one spoke about such things in the community or in school.  However, when one admitted   that he hardly used condoms and withdrawal was his contraception of choice,  the rest swiftly pointed out that he was  at risk of impregnating his partners and contracting  a sexually transmitted disease.

We were heartened that those present believed that parenthood was a choice for a couple to make and not something that should be left to chance. They spoke about the need for financial stability and explored what being ready to start a family meant.     Whether a couple was willing and able to share the   responsibility of raising children was one indicator of readiness and another was the availability of extended family support.

At the end of the evening, the youth concluded that their biggest takeaway was that their actions had consequences and talking openly about difficult issues was a good way to clarify one’s thinking.

“Having sex is free. But everything else is not free. Condoms. Babies. Responsibilities. They all come at a cost. Having a baby is a big commitment and being a father is a big responsibility,” was one wry summary.

Have a good week ahead.

Gerard
A hero is someone who understand the responsibility that comes with his freedom. – Bob Dylan