International Women’s Day falls on 8 March every year but despite missing the date, some of our interns felt strongly that it was important to recognize the contributions of women in the neighbourhood that they were working in.   So, in the same vein, they organized “Happy Women’s Day” to honour the achievements of the many women they had met which they felt were often overlooked.

For instance, when a 58-year-old grandmother who raises her grandchild singlehandedly was asked to share a personal strength or an achievement the past year, she was silent because she felt that she could not be regarded a success by any means. However, when encouraged she shared that her biggest achievement was succeeding in registering her grandchild for primary school.  Not native to Singapore, she struggles with the English language and as such, missed the registration phase in which her grandchild was eligible.   Determined to put things right, she consulted her neighbours and eventually made her way to a family service centre   where a social worker resolved the issue.

The child’s parents are incarcerated but this grandmother is committed to giving her grandchild the family she needs.  For this grandmother and several others, family is also defined as friends and neighbours who have their best interest at heart.  So, to help them widen their circle of support, every woman who was invited was asked to bring a friend who has been a significant source of support.  In all 30 women showed up and joined by 8 female volunteers from Bank of America Merrill Lynch (BAML), they got to know each other and affirmed each other’s contribution to their family. 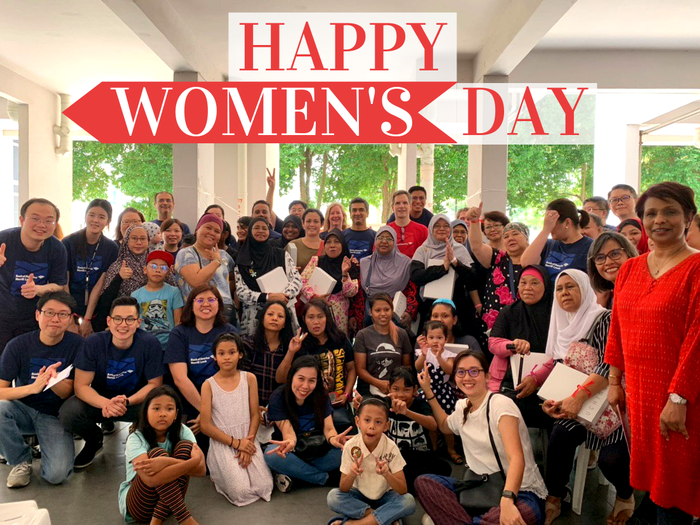 The very encouraging observation was that regardless of their background, the women resonated deeply with each other’s responsibilities as a mother, daughter, sister and partner.  When someone shared, “Seeing my child’s face keeps me going no matter how difficult the situation appears,” everyone nodded knowingly.  Similarly, when children were discussed, it was apparent that the need for love, care and guidance applied to all.

The women then penned down words of affirmation for each other and pinned them onto a “tree” with deep roots and many branches which was understood by most to symbolise solidarity.  All the time that the women were being with each other, their children were being engaged by 15 male volunteers from BAML, who believed that even mothers who cared deeply about their children and daughters, sisters and partners who took on their roles dutifully,  could do with some time being simply a woman.