“My relationships with my neighbours was okay but now not good because of my children and their friends. They complain a lot that my house is noisy,” responded a mother of 5 when asked what issues children in her neighbourhood faced.  She added, “I know we have to be considerate but then where should my kids hang out?”  This mother was concerned that her children would get into trouble if she allowed them to spend their free time unsupervised. She had noticed other children in her neighbourhood smoking and felt that it was only a matter of time before they got into more serious trouble.

Last Saturday, 10 residents agreed to attend a meeting to explore how they may better care for the children in their neighbourhood. Over the past 2 months, they have told us of children shoplifting, missing school and as a result failing in school or getting into trouble with the police. However, only 6 showed up which suggested that we did not really have their commitment in the first place but we will do well to appreciate that such is the pace and rhythm of a community. Hence, we proceeded with a view that every effort helps to create a momentum that would eventually draw more people on board.

After a round of introductions and reiterating the purpose of keeping children out of trouble, we asked the group what makes them happy and positive about their neighbourhood. We learnt that people were already supporting each other and looking out for each other’s children, “When there is a problem, people come down, discuss and sort things out. Community is one big family and my friends’ children are also mine,” one shared and another gave an example how a neighbour spent much time assisting her to get into her home when she lost her key.  She felt that there was a sense of connection among people and this made her happy.

When we got to discussing the issues, a 26-year-old man recalled how his grandmother chased him around the block twice and stopped him from entering the home when she discovered that he had picked up smoking. Now that he is older, he appreciates his grandmother’s actions but back then it got him more rebellious. He felt that youth needed to be approached gently but it may be difficult for someone who is still smoking to render the advice not to do so. He also understood why young people believed that smoking was cool, and it sounded like he was torn between doing the right thing as an adult and identifying with them. 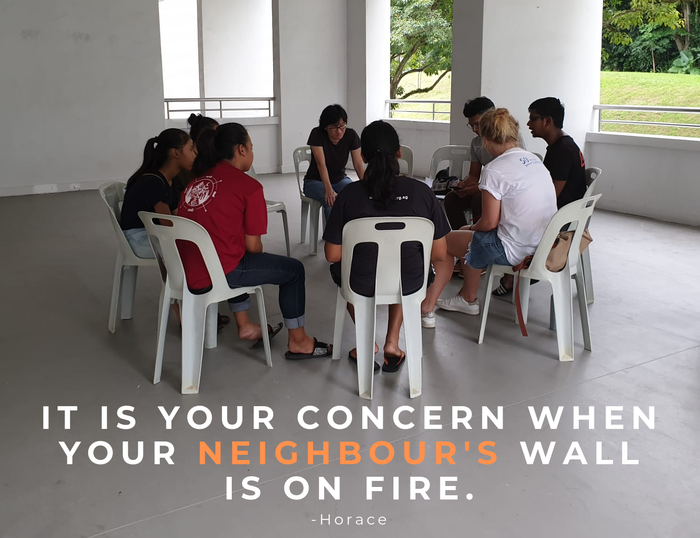 Change is always difficult and to stay the course, it helps to be aware of what is at stake in its absence.  “If things just continue, something bad will happen. Since we all are like a family, it will impact the whole community. A small theft will become a robbery. A lie will become a scam. If everything continues, our youth will just go in,” one stated passionately.  She then wondered aloud about the need for one to be imprisoned before deciding to change as by making small changes, youth can avoid prison.

Discussing problematic situations can be discouraging as one tends to feel rather helpless, but this group understood the significance and strength of people coming together. “Let’s go out together and if my sister does not listen to me, she might listen to an older person who is a parent. Once a month will be great and it does not have to be a big thing. I believe when people know each other better things will be better.” was a view that others resonated with.

When helping professionals like us look at such a situation, we tend to regard these children as lacking self-esteem or to suspect their caregivers as being neglectful or inadequate. Perhaps, what’s inadequate is not their will or ability to parent but simply the support and positive regard from those of us tasked to support them as well as some compassionate understanding of their circumstances from our wider society.   One mother spoke for all as she said, “I just like the neighbourhood kids to be nearby so we know where they are and can relax a little. Looking after each other’s kids and youth makes me happy because when a child in my community succeeds, I feel so proud.”

“May our effort, confidence and concern for others be the altar from which we pray for personal abundance.” ― Laura Teresa Marquez