Two months ago, 52-year-old Hasan had a high fever and while waiting to see the doctor at the polyclinic, a nurse approached him to have his blood pressure taken. He was rather reluctant as he did not want to hear more bad news but was cheered when he was complimented for having a normal reading.  A few days later when he was feeling better, he walked past a roadshow by the Singapore Civil Defence Force and noticed that there was a counter helping visitors to check their blood pressure.  He took another reading and was delighted to learn that his blood pressure was recorded as 120/80 mmHg.

“Community has changed my lifestyle,” Hasan reflected after a pizza party to mark the 1stanniversary of his neighbourhood’s football programme for children. Hasan describes himself as a parent volunteer and facilitator. “I help the children understand coach’s instructions and make sure they obey them,” he elaborated.  Hasan has 2 sons in primary school and to stop them from kicking a ball along the corridor and disturbing the neighbours, he took them to the field on his off days. Soon another father brought his sons to join him and after a few weeks, children from both families joined the neighbourhood football programme and both fathers became volunteers.

Hasan works part-time as a pharmacy assistant and wherever possible, he schedules his work around football training and games. He figured that by doing so, he was spending quality time with his sons, helping to care for his neighbours’ children and keeping himself fit. “I don’t just stand there giving instructions. I follow coach’s instructions and show how it’s done. At first it was very hard but now I am fine.”  When he was diagnosed with hypertension a year ago, Hasan knew that he had to make some changes in his daily routine. So, he stopped having second helpings during meals and tried to increase his physical activity.  “Getting involved in the community meant that life was no longer just work, eat and sleep. I noticed that I worried less and while happiness is something that comes and goes, it comes more often.”

Being a volunteer also enabled him to be on friendly terms with more neighbours. On weekends, he taps on the Wi-Fi of a neighbour to livestream football games for his children. “I was never so interested in the games, but my sons kept showing me how different star players celebrated their goals. Now thanks to my neighbour, these games are good family bonding time.” 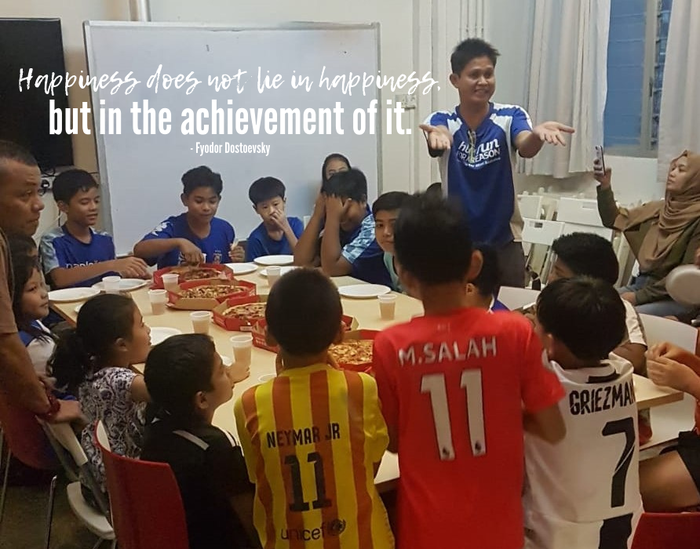 During the recent anniversary party, Hasan proudly presented certificates and a brand-new pair of futsal   shoes to all the children in the programme. He was glad to see the smiles on the kids and proud that he played a part in securing sponsorship for the shoes.  He will continue to champion football for children in his community and had already asked the Chairman of his Residents’ Committee about the possibility of refurbishing the neighbourhood football court. He would like the children to be eventually training with a professional club and   he believes that good facilities to support their development are important. He is also confident that it can done because the PAssion Children’s Football Programme which once had a participation fee has now been made accessible to all in his neighbourhood by the Bukit Ho Swee Court Residents’ Committee and the South-Central Community Family Service Centre. He believes that these organisations care deeply for the well-being of children and youth and will help advocate for a better football court.

The fact that he is currently not troubled by hypertension has put a spring in Hasan’s step and made him more determined to continue serving his community.  When we congratulated him on successfully managing his blood pressure, we asked him what does health mean to him and he replied, “Health means being able to care for my sons until they are old enough to look after themselves.”

“The roots of poor health and poverty are the same. By joining forces, community development and health can have even more impact in the low-income communities they serve.” — Colby Dailey, Build Healthy Places Network