6 years ago, to get young people into a meaningful discussion about teenage pregnancy, we cooperated with Babes Pregnancy Crisis Support to run a series of forum theatre performances. Together with the support of volunteers trained in drama, a colleague put together a play that got both adults and young people in a difficult but meaningful conversation.  The following year, more volunteers with drama training created other plays to surface shared concerns within our neighbourhoods.  On the third year, a young person from one of these neighbourhoods got involved with the programme and ended up being a lead actor. Since then, our Community Theatre Programme has been mainly managed by youth living in the neighbourhoods we support.

Last night, these young people proudly presented The Block Party a self-researched and produced play at the Esplanade Theatre Studio. After 18 months of preparation it was a proud opening night with a full house that responded thoughtfully to a glimpse of poverty in our midst. In doing so, the performers presented an intangible but valuable experience that put the audience in touch with their sense of empathy, fairness and perhaps, biases they do not care to admit.

6 years ago, volunteers presented the gift of drama to our neighbourhoods, now their young residents   are using this gift as a window to experiences of poverty as well as a mirror that reduces blind spots.  They have affirmed a narrative we hold dear that regardless of who we are and our place in life, all of us can give something that enriches others.   Thus, we are most grateful for their gifts and are mighty proud of them. 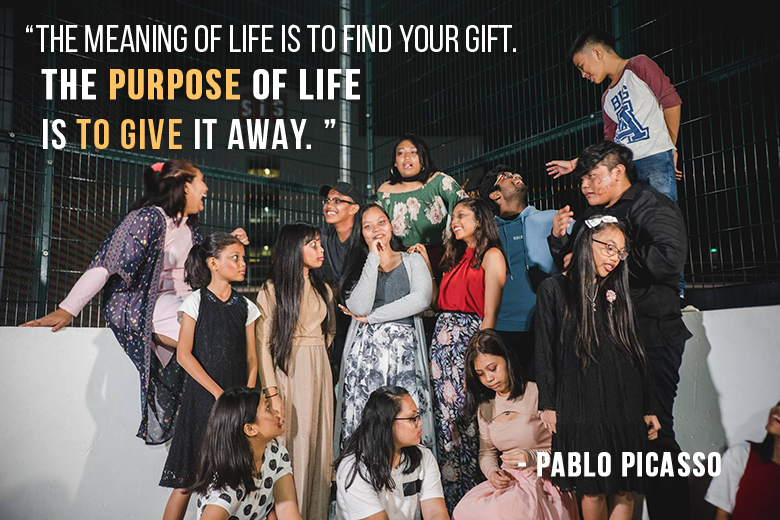 We are also very grateful for the enormous support the Block Party as received.  Apart from a few seats left for tomorrow’s matinee, the shows have sold out.  Moreover, this evening, we will   have the privilege of welcoming Mr Baey Yam Keng, Senior Parliamentary Secretary, Ministry of Transport & Ministry of Culture, Community and Youth as our Guest of Honour.   Mr Baey will be meeting the performers and their families to acknowledge their creative effort and importantly, their lived experiences.

At the end of every performance, performers field questions from the audience and last night there were many. In response to a question why some video footage was the backdrop of a scene, the answer given was to allow neighbours who were not on stage to be a part of the show. It was also to honour a caring person many children in the neighbourhood addressed as “mummy.”   A performer also explained that the situations featured were chosen by group consensus and those where people were still feeling affected were dropped.

There were also questions about the authenticity of certain scenarios, but the young people stood their ground that it was commonplace in their lives. When asked to convey the one message they would like the audience to take away, one actor said, “Poverty is not always recognisable but someone sitting next could be experiencing it.”

Gerard
Art is a lie that makes us realize truth. – Pablo Picasso