In my note last week, I reflected on how we could honour parents as the child’s first educators.  I considered getting parents to teach music and other subjects that drew children’s attention to the strengths and beautiful things within their families, communities and culture. I also suggested using the stories of parents and families to convey values where appropriate.  In response to my pondering I received an email suggesting that one valuable lesson parents should impart is to simply ask their children regularly, “How was the world a better place today, because you were there?”

It was a question the writer’s parents had asked her when she was a child and I was struck by it because it would not be one that is out of place with any of us at any age. It showed me how powerful and far reaching a parent’s guidance could be. As someone who is paid to make the world a better place, it got me thinking that I should be able to answer that question satisfactorily every day.  So, the first thing I should do is to be able to appreciate the world around me and not depreciate it.  What lessons would we be teaching children if they constantly hear us complaining of their families, communities and culture?  What type of cooperation would we get from others regardless of their age, if we believe that we are superior in some way or other? 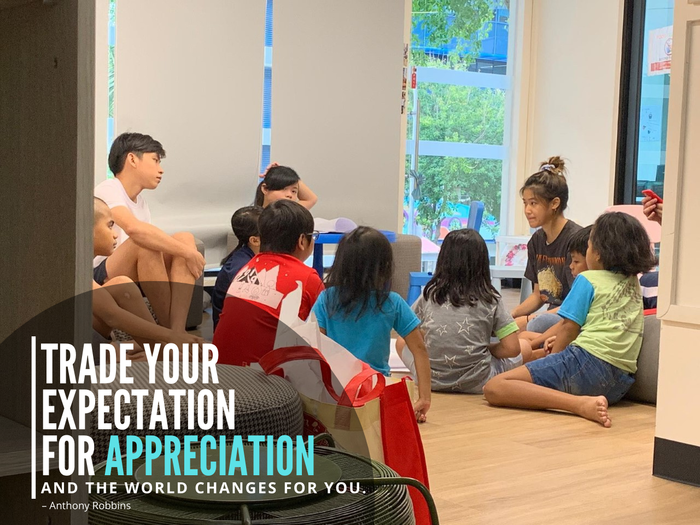 To engage a group of children in a conversation about their lack of attendance at school, 2 interns conducted a 4-session programme with them this week.  One activity that got the group talking in an orderly fashion was role-playing. Members assumed the role of characters from a snippet of a movie that was shown and answered questions in role.  Answers to why one missed school came easily. After the activity, participants were asked if the answers they heard from each other also applied to them personally.  Most just smiled and shrugged their shoulders, but it seemed like we succeeded in facilitating a reflective moment.

Not every activity went so smoothly and during a debrief, a colleague told our interns that sometimes we should just let the noise happen and listen carefully.  We tend to define a successful activity as one where we were in control but perhaps, we fail to appreciate that when young people are engaged in a conversation of their own, they are simply taking charge of what matters to them. It is not defiance and our role would be to take an interest in what is being discussed and to offer an adult perspective when appropriate.   In other words, pay attention to what is being said instead of insisting on receiving their attention.

One man may hit the mark, another blunder; but heed not these distinctions. Only form the alliance of the one, working with and through the other, are great things born. – Antoine de Saint-Exupéry