“It’s the school holidays and it seems like a good time to get to know the other youth in your neighbourhood,” we suggested to a couple of teens last December. They did not reply but it was quite clear that they were not wild about our suggestion. Nonetheless, they heard us out and eventually one of them agreed to gather a few friends for a meeting. He would tell these friends to invite others too.

5 youth showed up a few days later to hear what we had to say. We told them that we wanted to organise some outdoor activities but when we shared our first idea of going to the MacRitchie Treetop Walk, they pushed back firmly.  They protested that it would be very tiring, and they would only get   frustrated. Bickering with one another was not a good way to start a friendship, they insisted.  After some discussions, they told us that the best way to bring young people together was to organise some games in the neighbourhood and they would help us do so.

On the scheduled games day, we met at a void deck as they had instructed. The space measured approximately 12 by 9 metres and it looked   terribly small for outdoor games. However, those present organized themselves into 2 teams and within minutes a “tic-tac-toe” race was in full swing.  Then a game of captain’s ball was played energetically, and the event worked out to be a good 2-hour aerobic activity.

So far, we have had 2 such games day and each time, these young people never failed to amaze us with how much fun they could have with simple competitions they had adapted. On the second day, they used the benches at the void deck for station games such as cup stacking, coin throwing and again tic-tac-toe but this time by flipping a cup onto the square. 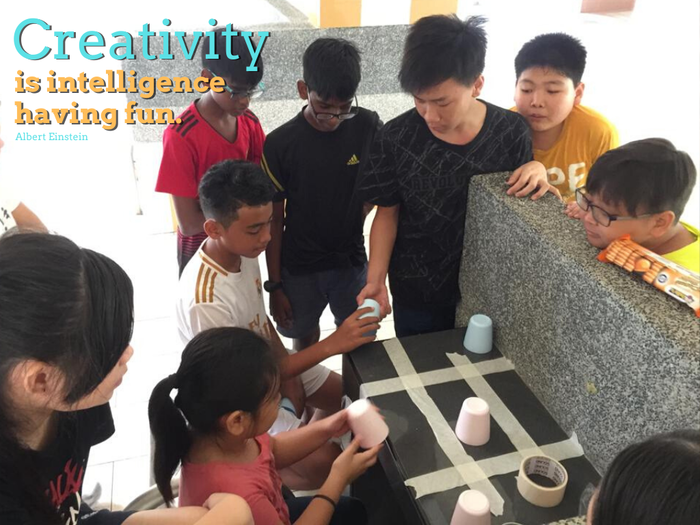 We would never regard the void deck as the outdoors, but these young people showed us that it is not where we are but what we make out of it.  In their own way, they optimised it as the community bonding space that it was intended for.  After the first session, we asked the participants how the games went and what they meant to them and a young girl thanked us for giving her the opportunity to lead. She enjoyed the responsibility of organising the event and felt really pleased that even the boys respected her instructions. This 13-year-old concluded that leadership meant being fair to everyone and being clear in communication.

Listening to her and the others who shared how enjoyable it was to play with their neighbours made us glad that we did not insist on going to MacRitchie.  The walk would not have offered as many opportunities for these young people to assume responsibility or leadership and it would certainly not have generated the boisterous laughter that made these sessions fun.  We gathered that good engagement always begins with what people are willing to do.

You can’t use up creativity. The more you use the more you have – Maya Angelou