Last Monday, 10 October 2022 was World Mental Health Day. The World Health Organisation (WHO) describes mental health as a “basic human right. And it is crucial to personal, community and socio-economic development.” WHO elaborates that it is not just the absence of mental disorders, but good mental health is having a state of mind where we cope well with the stresses of life, learn and work well, and contribute to community. Importantly, mental health is not just determined by psychological and biological factors but by a “complex interplay of individual, social and structural stresses and vulnerabilities.” 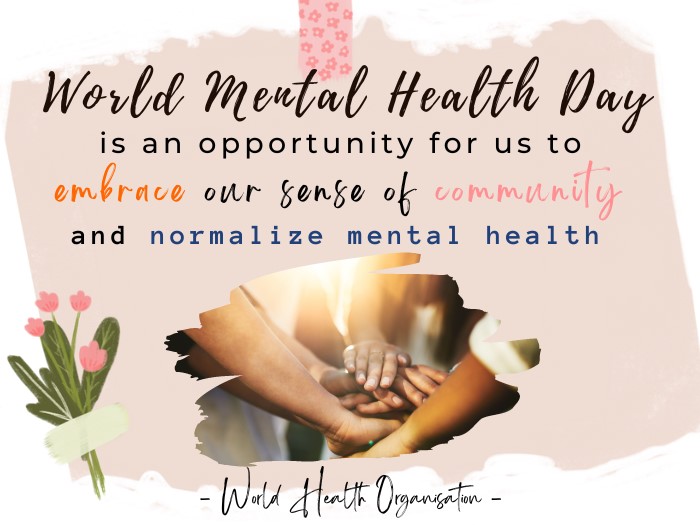 A teacher at our child development centre was moved after listening a mother’s heartfelt sharing. Our colleague approached this mother to discuss her child’s progress in school but soon found herself gaining an appreciation of mother’s challenges. Mother shared that she had been under tremendous mental strain the past 18 months and only plucked up enough courage recently to speak with a mental health therapist. The positive experience at therapy has given her the confidence to confide in others and our colleague was someone she trusted.

Mother explained that she was most uncomfortable with the uninvited and unwelcome attention from a male colleague, but no one at work acted on her complaints. When she spoke to her husband about it, they decided that she should hold on to the job until she could find another that paid her just as well if not better. That was not to be and not long after she was unable to cope with the workplace environment and left without having another job.

Hence, there were frequent disagreements about finances which she accepted but found it difficult to cope when the disagreements led to fights about parenting styles, household responsibilities and the quality of their relationship. She experienced a sense of worthlessness which was exacerbated when her husband responded to her suggestion for marriage counselling by staying away from home. A month ago, as she was in much pain and feeling like it was the lowest point in her life, her children noticed and asked if mommy was sick. Their gesture of concern jolted her to seek help the following day. She reckoned her children gave her the courage and strength to pick up the pieces of herself that feels broken.

When we reflected on the mother’s story, we were saddened that she attempted to hang on to a job despite feeling traumatised because her family needed the income. It appeared that this decision strained her marriage in ways she could not cope. Seeking support early from people she trusted may have prevented her mental health from deteriorating.

Social support is an important preventive factor, and we were heartened that youth in our HeadStrong programme recognise this. At the least session, they articulated the dreams they had for their personal wellbeing and this was how one of them eloquently put it, “My dream is that when I end up spiralling back into a mentally unhealthy state, I will know where and who I can go for support. I dream that I will always have someone to share my stories with because they help me understand myself better, and I will always do the same for others, to hear their stories and to understand them. I dream that we never forget that all of us deserve love and are loved, and we will never stop loving others.”

For peace, community, and love,